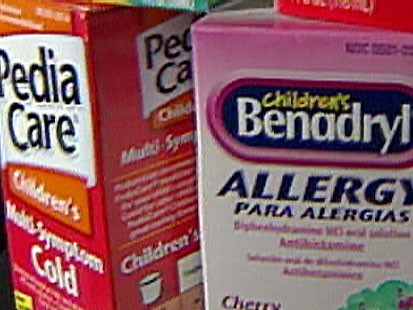 Fall really hasn't set in here yet (temps are still close to summer-like numbers). But with school back in session, the cough and cold season has definitely returned. Everyday I hear of kids' coughs and fevers and other respiratory symptoms.

Also, everyday, I hear questions of what to give kids less than 2 years old for these symptoms. Apparently, according to the FDA, avoid over the counter cough meds in these kids (ABC News).

In a report released last week, safety experts within the Food and Drug Administration said they would recommend NO level of dosage for children under the age of two, "due to the lack of evidence of efficacy and safety concerns."

"There are a variety of problems that can occur, and there have been some deaths associated with cough and cold preparations," says Dr. Janet Serwint, who signed a petition, asking the FDA to warn parents about the dangers of these medicines.

Even more amazing, the industry itself — while insisting its medicines are safe — now agrees they should not be given to very young children.

"Parents should not use these products for children under 2," says Linda Suydam, president of the Consumers Healthcare Products Association.

Last week, I was asked about these types of medicines for kids under 2 years old, and I related the FDA concerns. The parent then told me, "Then, you expect my child to cough all night? There's got to be something to give him to bring the stuff up, right? How about an antibiotic?"

I predict that with this FDA advisory and subsequent news reports - that docs will be pressured even more to give kids antibiotics for what seems to be viral infections. I'm telling docs out there (including myself) - Stand your ground!

If you think your patient (whether they be a child or adult) doesn't require an antibiotic, then say so. It's going to be difficult (I go through this everyday), but I know you can do it!
at 7:09 AM

Until I was finally diagnosed with asthma at 13, I never got the OTC stuff for my frequent cough (which my grandma described variously as "coming from the basement" or "how does such a big noise come from such a little person?").

Nope, even back in toddlerhood I got the good stuff--the industrial-strength kind with codeine. I guess in the early 80s we were all a bit naive...

I think that sometimes as parents we just expect our pediatricians to be able to "fix" anything that's wrong with our children. There's got to be some sort of potion out there to fix whatever ails them, right. But, more often than not the parents forget who is the doctor and why we are paying YOU to look at our children! Heh heh heh

Thanks for the great advice. My youngest just turned two. Most of those meds will say do not give to children under two for those of us who do still read labels. I always follow the dosage instructions prescribed by my pediatrician. My children are too important for me to do otherwise!

Thanks for posting this Dr A!

I agree, as mother of 3, I don't want an antibiotic if it isn't necessary. If it's viral, and there is nothing our ped can do to clear up the infection, than so be it. However, I see no reason to not treat the symptoms. When I have a cold, my head is congested and hurts, and it hurts to cough, my throat is sore. My ears seem clogged. Why treat children differently? Does their head not hurt? Are their sinuses not congested? Aren't their throats scratchy and sore? Should we not break up the nastiness in their chest that makes it hurt to cough, and difficult to breathe after a coughing episode. Seems to me a decongestant/expectorant/pain reliever is in order for these little people.

My daughter is 3 and I have ALWAYS used OTC I don't know what I will do now. She takes allergy meds everday of her life or she gets sinus indections. Its cheaper to get OTC meds than RX meds and it WORKS I wished they would do the study on my child she's living proof that this stuff workds. I wished sometimes that doctors would get advice from moms not the text books bc most of the time were right!!!!!!!!