The Cardiac Feud: DeBakey Vs. Cooley 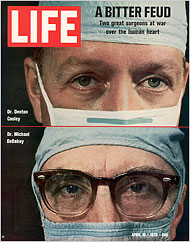 I wouldn't call myself a history buff, but I enjoy reading about the past - especially about medicine. In today's New York Times, it tells the tale of what apparently was a huge feud in medicine - specifically cardiac medicine - for four decades. For me, the most controversial medical issue I remember learning about was the discovery of the AIDS virus and the two people who tried to get the credit for that.

But, this cardiac feud is one of the best historical stories that medicine has. Both these surgeons were pioneers in the area of cardiac surgery working in Houston. And, for 40 years, these two gentlemen spoke little to each other and couldn't even stand to be in the same room after "the incident." What happened? Here it is from the NYT:

The breach began in 1960, when Dr. Cooley left Dr. DeBakey’s practice at Methodist and moved the few hundred yards to St. Luke’s Hospital, where he later established the Texas Heart Institute. But it was an incident in 1969 that turned the rift into a full-blown feud.

It happened when Dr. Cooley, without approval from Dr. DeBakey or Baylor, commandeered an artificial heart from his former partner’s lab and implanted it in a patient at St. Luke’s.

Over the years, Dr. DeBakey has called that first-ever use of a total artificial heart a theft, a betrayal, unethical and “a childish act” to claim a medical first. Dr. Cooley defended the implant as a desperate, if ultimately unsuccessful, act to save a life.

What? Did I read that right? I mean, in today's medical world, I can't even imagine something like that happening - especially with all the double checks, paperwork, and bureaucracy that happens in today's operating rooms and hospitals. But, to think about it, I'm trying to think logistically how that happened, and it fascinates me.

I encourage you to read the entire NYT article. It really gives you a flavor of all the background that happened after "the incident" in 1969 and the decades that followed. Apparently, recently, they have reconciled. But, to be a doctor there in the 1960s. Definitely interesting to think about and dream about. A whole different world of medicine and a whole different world around us back then....
at 12:28 AM

If you think that is wild try reading about the development of the first hear/lung machine. They were trying to use dog and parents as stand ins for the child's own lungs. It was shocking to read about, but also makes me wonder if we could have achieved the same results if the rules of today had been in place back then.

That is pretty crazy. But all those hospitals in the Texas Medical Center are literally across the street from each other. Cooley could have left his office, pilfered the heart, gone to McDonalds, and been back in his office within the hour.