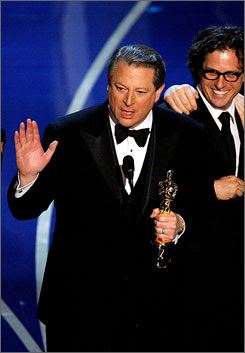 No, Mr. Peace Prize winner (image credit) didn't say this. That punch line comes later. Now, before people start throwing things at me, I did not say this either.

According to today's report from Reuters, a UK government think-tank states that obesity is a consequence of modern life, and not due to over-eating and lack of exercise. Huh? What's up with that?

It found in a report that the technological revolution of the 20th century has led to weight gain becoming unavoidable for most people because our bodies and biological make-up are out of step with our surroundings.

"Stocking up on food was key to survival in prehistoric times, but now with energy-dense, cheap foods, labour-saving devices, motorised transport and sedentary work, obesity is rapidly becoming a consequence of modern life," said Sir David King, the government's chief scientific adviser and head of the Foresight programme.

The article goes on to say that it may take three decades to reverse the "so-called epidemic." What needs to happen, according to the study's authors, is a change in the entire society, because this problem is too complicated to leave to personal responsibility. Here is my favorite paragraph of the entire thing.

Tackling obesity, like tackling climate change, requires a range of changes in society, from increasing everyday activity through urban design and transport systems to shifting the drivers of the food chain and consumer purchasing patterns to favour healthier options.

Comparing obesity to global warming? (Apparently now, climate change is now code-speak for global warming.) If that's the case, then Mr. Nobel Peace Prize winner should make a musical out of it - An Inconvenient Fast Food Nation! He can then win the Tony in addition to his Nobel, Oscar, Emmy and Webby. LOL
at 5:01 PM

Hi Dr A. I heard this snippet from BBC International...and you beat me to blogging this.

The problem of obesity is too complicated to leave to personal responsibility? That statement is funny in a sick codependent kind of way. Thanks for the chuckle.

I must say i like your style. I also have seen this on largefriends.com, and i think there is a long way to go on the way to success! it's absolutely an uneasy matter ,i completely agree with you.