Obese Kids To Be Offered Surgery: The government in the UK is sending the ultimate message of accountability for your actions by offering surgery "as a last resort" to obese children. Richard Watts, campaign co-ordinator of the Sustain's Children's Food Campaign, said: "Instead of expensive and unpleasant surgery, we should look to improve children's diets by protecting them from junk food adverts before 9pm and making cookery lessons in school compulsory." DUH!

Of course, you could do something obvious. No, not encourage exercise. That's too easy. You can ban certain foods, like trans fats. Apparently, that's the fad now in the United States. Cities like Cleveland, Ohio are following the lead of New York City. Oh well. Maybe that will help the obesity problem in kids.

What the study didn't show is the potential increase complication rate with more biopsies taken and increased time under anesthesia. Stuff like this is always left out of media stories. I wonder why. Hmmmmm.....

Gliding Mammal Lived More Than 125 Million Years Ago: Scientists found a fossil of what they're calling a "gliding mammal." The mammal was probably nocturnal and dined on insects. It was similar in size to a modern flying squirrel.

You're wondering, why did I pick this story? You know, I don't really know, other than I really liked the picture. What do you think? Have a great day! 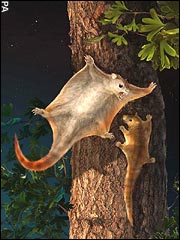 Doctor, the flying squirrel and I have a lot in common now. I am also able to jump from trees and tall buildings. Yes, the place where muscle once was on the back of my arms, now give me the ability to glide, rather smoothly.

As you know, there are multiple issues related to obesity but helping to educate is SO important.

Nasty looking squirrel...babsbitchin had me in stitches, excuse the pun.

Those gliding mammals look like about the meanest squirrels I've ever seen.

Obese Children are becoming an epidemic! Where are the parents?