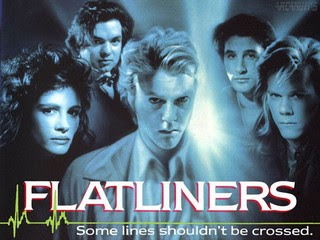 Personally, I wanted to see Julia Roberts as a medical student (How You Doin?) and dreamed of her being in my future med school class (Ahhhhhh....). For those who haven't seen the movie, in a word, it was, "Eh..." Not great, but not bad either. Remember, this was a few years before television's ER and the current string of hit medical TV shows.

Anyway, what's this have to do with sitemeter? Probably absolutely nothing! But, this week, I've been pulling out my hair because my sitemeter has shown ZERO (meaning flatline) for days. I thought that I was doing something wrong. Or, would this be my first complaint using the new blogger?

However, in doing some research on this, I find that the problem is on the end of sitemeter and not me and not blogger. Whew! That's a relief. Here's the quote from the sitemeter blog:

s25 - Update
We are aware of delays and lag on s25 and are doing are best to resolve it. In this case we had a particular site that has been running a promotion, nearly quadrupling their traffic. We’re working on relocation this site to another server. We expect to see the lag dissipate over the weekend. Thanks, The Sitemeter Team

That makes me feel better. I was getting concerned when I kept seeing a big fat ZERO on my stats and seeing this sentence, "The statistics for visitors from the last 3896 minutes are not yet available." I wonder how big that number will get until the problem is fixed. We'll see....
at 12:01 AM

I hate to be the bearer of bad news, But..I was getting the exact same thing..They sent me almost that same message. For a long time it said statistics for last xxxx minutes are not yet available. And they never did become available..

After several emails they informed me I needed to start completely over with sitemeter, for the problem to correct. I lost everything for almost the whole last year with them. I had to sign up as though I had never had sitemeter..They told me it was from "them" switching servers. I had wondered if anyone else had encountered this issue..I hope they get yours corrected, but, they sure didn't mine.

That's a scary look you've got there, Doc.

Oh, me too. No Sitemeter stats for days.

Did you think nobody loved you any more? We're still here but we're zeros.

Don't feel too bad Dr. A, my site is chronically flatlining. But I don't use it for the comments (although they are VERY nice), it's more of a way to blow off steam.

Glad to hear your sitemeter will be functioning again :)

My blog over at wordpress has it's own blog stats built in. It's not quite as good as the other site meters out there as it doesn't give info like how long the visitor stayed or where they are from...but it's already built right into the blog system so no worries about a third party screwing up.

I thought nobody loved me any more :(

Glad to see it is affecting alot of folks.

I don't use sitemeter but I have had the same problem with my tool. It just drops and I need to re-insert a newer code that it generates into the template. Why this happens is beyond me. To my mind, it should remain static.

But you get what you pay for (i.e nothing?) If you're paying for your stats tool and it's crapping out on you that's even more disappointing.

My first serious boyfriend ADORED Julia Roberts and had a GIGANORMOUS poster of her, in his small Parisian apt. Me made out every night, with her gazing at us
:( He got turned on by her, I didn't.
I'm never too concerned about my stats, as it has to do with 'being in the limelight' which I am, now and then, and I'm more concerned about people showing up. Perhaps I should pay more attention to it.

You, at a zero? Never happen. I don't have a site meter - it was just to discouraging to see a 2 on it all the time, and one was me responding.:)

I confess that I kind of liked that movie "Flatliners". It had a sort of gothic charm. (But understandably, I liked the guys rather than Julia Roberts...) I remember dating a mischevious cath-lab tech once and told him dramatically that if he embarassed me in the hospital one more time that I'd "simply die"---and he retorted that he'd simply "code me and bring me back"....

Your mentioning that movie is such a blast from the past! I actually liked it. Kind of morbid and the whole don't mess with nature theme.

Wow. Came to you for one reason and found another to comment on.

I loved Flatliners! Such outrageous characters...

Regarding your site traffic: If/When your sitemeter comes back online, are you getting hits from The Random Blog button at Bestest Blog? I think he's on the fritz, I haven't had any in a while. I figured since you're one of the top Premium Blogs you'd keep an eye on your investment.

Keep up the good work!

Wow, I thought I had messed mine up somehow because I hadn't seen anyone else post about it. I'll give it another few days and start over, I guess. I miss my siremeter. I got a blogcounter but I don't like it as well.

Damn another old man.
At least there is someone else who remembers "Flatliners" from college.

hey doc
I saw that movie Flatliners and actually enjoyed it. thanks for clearing up the info about the stats. Billy of Bestest Blog is also having problems with his Random Blog button. Well good to know I'm not the only one with low traffic. I hope they fix it soon.

Hi Dr. A. I'm another that liked Flatliners. Hope your sitemeter gets fixed.