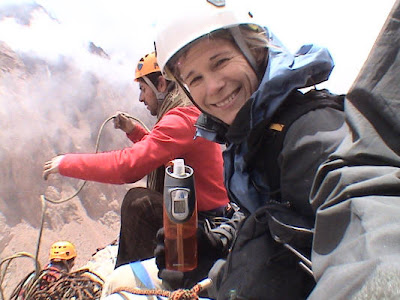 Too often, we hear about climbers who are lost as they try to reach the top of a mountain somewhere. Here's a story where a climber not only found the summit, but also is living out a dream.

Last week, this AP story reported that Kelly Perkins and her husband Craig, recently scaled a peak in the Andes mountains. Her other conquests include the Matterhorn, Mount Fuji and Mount Kilimanjaro. What's so unusual about these feats? She did it with another person's heart beating in her chest.

Perkins grew up around Lake Tahoe, Calif., acquiring a love for the outdoors that led to annual backpacking trips with friends. Her zeal for mountain trekking and climbing only increased after her transplant on Nov. 20, 1995. Any fears about stressing her new heart were overwhelmed by a desire to rebuild her strength.

Some 3 1/2 years earlier, she had been diagnosed with cardiomyopathy — a disease in which heart muscle becomes inflamed — which doctors blamed on a virus. For more than three years, she and her husband shuttled in and out of hospitals seeking a donor heart.

I was also able to find their website simply titled craigandkelly.com. The site shares the stories about their climbs and has amazing pictures, like the one above. Let tell you, this is very inspirational stuff.

The Andes adventure was all free climbing, using ropes and protective gear only for safety's sake as she moved up the rock under her own power, using only hands and feet to find natural holds in the crevices of the rock.

She dubbed the route the "Charmed Heart" as she led her team up one of several unnamed peaks in the remote Cajon de Arenales region near Argentina's border with Chile, more than 650 miles west of Buenos Aires.

Craig Perkins, who has given his wife a gold charm for every major mountain climbed since her transplant, gave her another atop the "Charmed Heart" route — this one of a woman mountaineer leaping for a peak and grabbing it by one hand. A tiny sparkling ruby represents her heart.

Thanks Kelly and Craig for sharing your story. I know a lot of my patients and friends who will love to hear your story. Keep climbing as many mountains as you can! I'm glad that you didn't let anyone or anything get in the way of your dream.
at 7:01 AM

That's really sweet-I'm glad that she can continue to do what she loves. Great for her.

'Feel Good Stories' unfortunately don't sell. I can't remember who wrote most about it, but Neil Postman wrote a lot about media, as did McLuhan. This I remember from my University/Journalism days.

On the other hand, I wonder when technology will be so advanced that we won't be looking at heart translplants, rather rebuild of our own organs, with stem cells or other similar ways. I do believe that technology will allow us to produce new organs for ourselves. Just look at what dentistry has done, now they can create a new tooth from a fraction of the old tooth, and replace it.
And people with spinal injuries are already getting help in Europe with stem cells. It's all fantastic stuff.


I would love to just get to go and look at that mountain, much less climb it!


It's interesting how different people react to life changing circumstances.

Have a great week!

Inspirational indeed. What a neat couple.

Glad to see she is up and going strong. It is more than a heart warming story. She charges ahead rather than "resting" up and playing life safe.