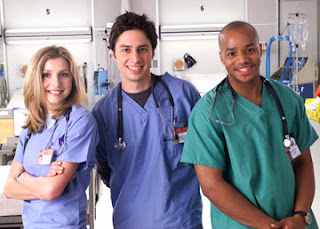 While this story may sound like a television show, this is a real deal. Sometimes, you can't make this stuff up. I cannot add any more comedy to this, so I'll quote it verbatim below.

BELGRADE (Reuters) -- A routine appendix operation in Belgrade went badly wrong when two surgeons started fighting and stormed from the operating theater to settle their dispute outside, the daily Politika reported Wednesday.

Surgeon Spasoje Radulovic was operating when his colleague Dragan Vukanic entered and made a remark that started a quarrel, said the anesthesiologist on duty.

"At one moment Vukanic pulled the ear of the operating doctor, slapped him in the face and walked out," she said.

Radulovic followed and an all-out fight ensued, resulting in bruises, a split lip, loose teeth and a fractured finger.

The operation was completed successfully by the attending assistant doctor.

Now, the Doctor Anonymous blog has just received the exclusive footage of this altercation from Belgrade, Serbia. The video is pretty grainy. I guess it's from a security camera in the operating room. What's a security camera doing there? Who knows?

But, because I'll do anything for all of my readers, and I'll do just about anything for ratings, here is the Doctor Anonymous exclusive footage of the fighting video. Enjoy!
at 12:01 AM

My Serbian SIL is good about sending news stories about Serbia, but he missed this one. Maybe I'll send it to him.

Wow, you can't get more unprofessional than that. It was, however, so funny that i spilled water all over my desk. My papers are all wet.

I've always loved slapstick - that was some great Stooges footage!

I really hope I never have doctors like that.

Thank you! OH!! thank you for the stooges. Made Friday seem a little more pleasant.

Yowser. What a story.

I hope I don't need emergency surgery next time I am in Belgrade. ;)

Thanks for the 3 stooges.Great way to start a lazy Sunday morning.Was imagining how the doctors fight must have looked to the patient lying on the table.Hope the patient was under anesthesia and not opened up yet.

Not sure if I heard it you on your blog or somewhere else, but a few months ago (possibly even just in January), there was a case in Russia where a surgeon performing some sort of surgery on the genitalia of his male patient, threw a temper tantrum and not only cut OFF the penis, but placed it on the tray and began to mutilate it.

The reason? He accidentally snipped one of the ureters and was mad at himself.

The government has suspended his license, investigating the matter, and is giving the patient free operations to repair his manhood using skin from his arm.

This is just as bad and totally unprofessional.