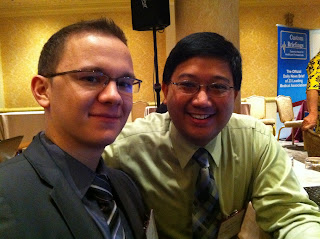 I'm having a great time here in Philadelphia at Digital Pharma East 2010. I'd like to thank the conference organizers for asking me to take part in the conference. I'll talk about the panel that I was on during a separate post. Usually during a meeting like this, I get to meet a lot of great people. And, I know that I'm going to probably offend someone if I don't mention everyone in this post. For that, I apologize.

However, for me, the highlight during the conference was meeting Berci Mesko, MD who is the founder of Webicina and ScienceRoll.com. He spent 24 hours traveling from Hungary to take part in the conference. I remember interviewing Berci in the early days of The Doctor Anonymous Show. And, he woke up at about 2 or 3am to talk to me live from Hungary.

We had a great conversation about social media. He told me that my blog and my internet radio show is a part of the curriculum for his Internet In Medicine University Course. We discussed me recording a video for his students about physicians in social media. He even told me that The Doctor Anonymous Show is a trivia question in his course. He is presenting today and he was interviewed at a session yesterday. I also invite you to check out Berci's update.

The highlight meet up that happened after the conference was with long time internet friend known as @LizzPiano. We started blogging at around the same time in 2006. In addition to reminiscing about those early blogging days, we had a great conversation about how we have seen the blogging scene change in just the past four years. The landscape of was was called "the medical blogosphere" then and "social health" now - has greatly changed with less pure story telling and more pure personal marketing of some who are seen as the leading voices in the social health space. I have a separate blog post in my mind on this topic. When will I write that post? Not right now...
at 11:24 AM