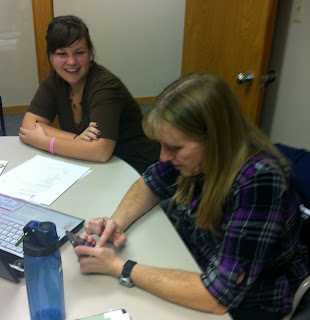 I've had a lot of titles in my life. But, "Twitter Mentor" has never been one of them - until now. Over the weekend, I was asked to lead a discussion about social media with my friends at the Ohio Academy of Family Physicians (OAFP). I've been involved with the organization all the way back to when I was a medical student.

The organization, lead by OAFP President Dr. Sarah Sams (pictured to the right above), has made it a priority this year to get involved and learn more about social media. This is where I come in. Not only was I asked to help come up with a strategy, Madame President asked me what twitter was all about and how to get signed up. In the picture above, Dr. Sams is tweeting for the first time. 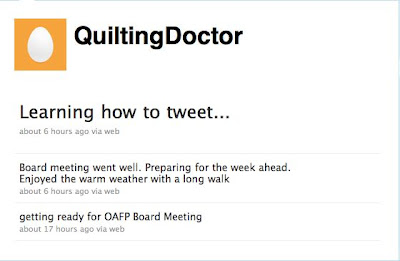 This was also interesting, because in last night's HCSM twitter chat, question number three was this: You’re charged with setting a colleague/MD/exec up on social media. Who should they start following, listening to, and engaging with? Why? What comes first?

In the HCSM chat, they recommended finding a kind of social media mentor - which I totally agree with. I mean, hey even CEO's of companies are asking for help from the tech savvy set. Sarah has been great to work with on this. I encourage you to give her a follow @QuiltingDoctor - In addition, give a follow to the Ohio Academy of Family Physicians feed @OhioAFP. Thanks so much!
at 1:41 AM

Hey, Dr A, I was thrilled to see @quiltdoctor on twitter. Another doctor who quilts! Following her! Thanks