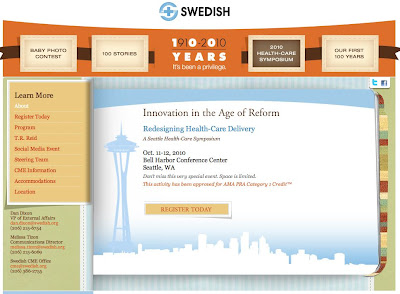 Swedish Medical Center in Seattle, Washington will be hosting their 2010 Health Care Symposium next week on October 11-12. They have an impressive speakers list including the CEO of General Electric. Dr. Rod Hochman, the CEO of Swedish, is even on twitter - and - sent me a tweet back when I said hello. (Very cool!)

I will be taking part in one of the Pre-Conference sessions. The speakers for this Pre-Con session include Kent Bottles, Nick Dawson, Dave de Bronkart, Jennifer Dyer, Wendy Swanson, and Bryan Vartabedian. (In the video above, I discuss the conference with Dana Lewis from Doctor Anonymous Show 187)

If you're not able to attend the event in person, that's ok. Swedish is making it available on a live video stream. If you want to watch the Live Video Stream, just go to http://bit.ly/sw100live - Also, as you're watching the live stream, use twitter to take part in the conversation by using the hastag #Swedish100 - They will also be using the social media tool called CoverItLive to try to funnel some of the conversation.
at 8:52 AM

Great post. Thank you. Full disclosure: I'm the person who's managing the event so it's always nice to see a little promotion. Looking forward to meeting you. Safe travels to Seattle.

Thanks for the great post.
That was an wonderful video.