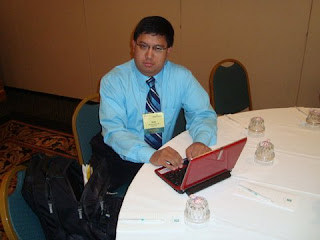 Last weekend, I was very excited to be at the 2010 Ohio Academy of Family Physicians Annual Meeting. For whatever reason, this was my first state meeting in a long time. It's always great to see and to catch up with long time friends.

In the morning session, I learned more about the concept of the Patient Centered Medical Home. I admit that I have heard the concepts for a long time - and they make sense to me. But this morning session was very practical in that it showed you initial steps on how to start the process. Check out a site called TransforMed: Transforming Medical Practices for more information.

Anyway, in the lunch time session, we had all four candidates running for the state supreme court seats - two for chief justice, and two for associate justice. The Ohio Academy of Family Physicians are unique in that they were the only organization (thus far) to get all four candidates in the same room during this election cycle.

The moderator asked each candidate the question and it was very interesting to see how each candidate answered the question. I won't mention anyone by name - basically because I don't want anyone from their campaign coming after me (hehe). Anyway, it was a sweet combination of civil discourse with political mudslinging. I admit that this is one of the few instances in my life where I turn into a political junkie. Good stuff.

The afternoon session was the business session in which the OAFP members talked about potential policies to be passed and possibly passed on to the national organization for consideration. As I remarked on my twitter, "Love parliamentary procedure, or lack of it." At times, I thought it was going to be like a foreign parliament in which chairs are thrown (not really, but that would be funny).

To learn more about the meeting, and to see some pictures, check out the Facebook page for the Ohio Academy of Family Physicians. I tried to twitter and to place out there facebook updates during the meeting. Social media is slowly coming around to the organization. But, if I have anything to say about it, the Ohio AFP will be well versed in social media - Soon.... :)
at 6:26 PM