Greetings from Atlanta, Georgia which is about 800 miles from Doctor Anonymous World Headquarters in Northeastern Ohio. What am I doing here? Well, I'm attending my first HIMMS conference (which stands for the Healthcare Information and Management Systems) annual meeting.

These are the 37 best posts that the medical blogosphere has to offer this week. In my editors picks, I wanted to highlight what I think are well-written stories. There is also a short excerpt from each of my picks this week. 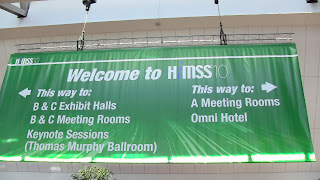 Also, I invite you to check out coverage of this week's HIMSS conference which include Better Health's live streaming interviews today and tomorrow (see the video feed and chat room at the bottom of this post). I will also be hosting a HIMSS wrap-up show with Dr. Val Jones on Wednesday, March 3rd at 8pm Eastern Time for The Doctor Anonymous Show 150 which is my live, interactive internet radio show. Now, on to Grand Rounds!

Dr. A's Picks Of The Week

Captain Atopic, a medical student in Australia, sees so much emotion in people's eyes.
Sitting in the corner of the meeting room, an off-call consultant's eyelids fall. The night registrar talks animatedly and the day team joke. The consultant's patients have been discussed and his coffee hasn't kicked in. The bounce of his chin rouses him.
The round passes through a medical ward; eyes look up, eyes dart around. The octogenerian's glassed, cloudy eyes search for focus, and find wanting. The narc'd lady next door sleeps soundly, eyes rolling in an opiate fog.

Bruce Campbell, a physician from the United States, learns that physicians and nurses have a lot to share even when we believe we do not.
The patient arrived at the rural clinic near Guazapa, El Salvador, in his mother’s arms with a mouth gag tied in place and his hands wrapped in bandages. As his mother put him gently onto the examination table, his muscles twitched hard, tearing the paper bed cover and forcing the gag out of his mouth. “Be calm,” his mother whispered to him in Spanish. He remained contorted but visibly quieted as our pediatrician, Dr. Mike, held him.

Bongi, a physician from South Africa, learned early in medical school that consultants only stick to their field.
we walked into the tea room where the consultants were hard at work drinking tea and introduced ourselves. the designated tutorial giver groaned audibly. he then glanced over at his colleagues and rolled his eyes. they chuckled. funnily enough i think they thought they were being subtle. after all we were mere medical students and therefore couldn't easily pick up on the finer points of non-verbal communication like specialist psychiatrists could. i was immediately annoyed, but i chose to hide it.

The rest of the medical blogosphere's best posts this week

The Clinical Cases and Images blog writes about Google Buzz from a medblogger's perspective.

The Allergy Notes blog answers a question about cetirizine.

The How To Cope With Pain blog outlines steps to take for living with headaches.

The Life In The Fast Lane blog proudly announces the appointment of "Professor Staghorn" to the university.

Code Blog describes how the Caring Bridge site is useful to families when a loved one becomes sick.

Jolie Bookspan states that exercises are more than "sets and reps."

The PalliMed blog gives networking and education tips when attending a national meeting.

The Health Business Blog describes how a med mal case was successfully defended at trial.

The Suture For A Living blog writes about lipedema, lymphedema, and lipolymphedema

ACP Hospitalist describes a recent conference session that neurologists/neurohospitalists need to know about.

ACP Internist posts their weekly Medical News Of The Obvious.

The Health Agenda blog talks about the complicated arena of E&M coding and billing for services.

The EMT Spot blog talks about Mastering the Head-To-Toe Assessment.

Will Meek takes a look at how to create positive change in a relationship with cognitive therapy approaches.

Mother Jones RN talks about Life In The Nurses Dormitory.

Lockup Doc describes steps we can take to avoid blaming the patient for lack of progress.

The Highlight Health blog discusses findings of a recent study stating that a personalized plan to lower cholesterol is more effective than following generalized guidelines.

The Medicine For The Outdoors blog talks about copperhead snake bites.

The Science Roll blog lists a collection of web 2.0 tools in genetics.

Dean Brandon asks the question whether your child's dentist is a pediatric specialist.

The In Sickness And In Health blog describes a PTSD of chronic illness and pain syndromes.

The Child Psych blog gives clinical resources and parenting tips on children with ADHD who have sleep difficulties.

Aggravated DocSurg states that sometimes we get the great honor of caring for those who deserve our ultimate respect.

That's it! Sheesh! Thanks to Nick Genes for the opportunity to host Grand Rounds for the third time. Don't forget to become a Facebook Fan of GR. This is so much fun to put together. See also GR 3.09 and GR 4.08. I hope you have fun reading all these great posts. Next week, Grand Rounds go to Health Business Blog.

Far from home, but still compiled a great edition :)

Thanks for hosting! How do you do it all???

I would like to thaks all of you who are think healthcare refoem in proper way & also thanks for hosting!