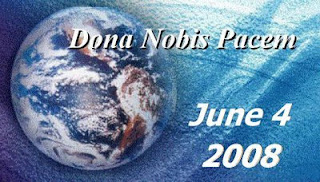 I know this post is early, but, it's already June 4th in most parts of the world. You may have seen globes like this in the past. This has been called a "Peace Globe Movement" by some out there in the blogosphere. This is a simple idea brought forth by Mimi Lenox back in the fall of 2006. Mimi was even a guest on The Doctor Anonymous Show Number Eleven back on October 25, 2007.

The idea is simple: To have as many people put globes like the one above on blogs around the world. Think that's silly? Well, there have been previous peace globe days on 11/7/06, 6/6/07, and 11/7/07. Check out the comment sections of these posts. And, of course, check out Mimi's site for a sample of globes from around the world. It's never too late to get your globe. Click here for more details.

Peace on Earth is more than just a day someone picked out and a graphic that you put on your blog. Yes, it's idealistic, but it's an idea of hope - In a world that needs all the hope that it can grasp. Thanks Mimi for continuing this movement and this idea. I'm hoping to see a lot of globes on June 4th.
at 9:01 PM

If peace is idealistic, then I want to be a Peace Idealist.

Peace to you and yours on this fine Blog Blast day!

"Dona Nobis Pacem" is one of my favorite rounds; a truly beautiful piece.

Peace to you and all you love.

Peace to you on this hopeful day.

"Words have power ... If you get the right ones, in the right order, you can nudge the world a little."

May we all say together: PEACE

Wishing you, me, all of us, peace.

There is no gesture so small that it may not touch another's heart.

From one person to the next, the message is carried.

Give Peace a Chance

Mimi is a wonderful woman isn't she? May her passion never cease!

Great to see you on board and what a nice Globe!
Mine is up too :-)
Hello from Norway - peace to you and the one you love!

May all our dreams of peace come true.

PEOPLE GOT TO BE FREE

Well done! This day is unbelievable! Peace to you and your family…

It's already the day after BlogBlast, but I'am still spreading the good vibes.
Peace and love be upon you, Good Doctor and all those who visit.

Thank you for blogging for peace today. I pray we made a difference in our world and will continue to do so.

Peace to you and yours,
Mimi