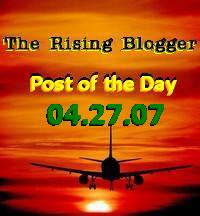 I was pleasantly surprised to check my e-mail box to find this message:

Congratulations on your award on The Rising Blogger. It is a brand new site that awards posts, not blogs. Your post from April 24, 2007 "Asians: The New American Villian" won.

Since we award posts, not blogs, you might even win again. We ask winners to nominate a post favorite of a fellow blogger. Call it "paying it forward". It is not a requirement. You have won this award because we truly feel you deserve it. Great post, good job! Thanks, Judd Corizan

I read their opinion regarding my Post of the Day, and found it interesting. What I really found refreshing is that even though they disagreed with my opinion, they still awarded the post.

It is his conclusion that we disagree with, that since Imus was fired, so should they. We are not sure if you disagree with one firing that you should use it as a reason for another. But, as we said this post is a fantastic read. As an Asian American he speaks of the tragedy at Virginia Tech and the face of the murderer.

Now, as the message says above, I should nominate a favorite post to "pay it forward." What a great idea! I'll definitely be on the look out next week. If any of you fellow blogaholics have suggestions on really good posts, send them my way, and I'll take a look at it. What I like, I'll send to Mr. Corizan. Get your best posts ready, because I'm coming to check them out!
at 12:02 AM

congrats! and i have a suggestion for you: i'd like to hear more on your thoughts about gun control and the mentally ill. especially after last evenings debate where Bill Richardson said, "We need more federal and state initiatives on mental illness to ensure those that have mental illness don't get guns."

last year bill richardson announced his support for "kendra's law", helping those with a serious mental illness receive the CARE the need before their illness drives them to commit a crime.

i think our problems lies within the mental health care system. people need to be treated and cared for. and in cho's case, one day was not suffice. it's not about gun control. and if it is to be, where do we draw the line???? bipolar, depression, anxiety disorders.....

I think that is most wonderful, Dr. A.

good for you! What a nice surprise.
Keep up the good work.
Feel free to take a look at my blog and see if it's any good.
Good luck.
Tory

Eh? I could've sworn I posted something here. Did you delete it, Dr A? Or did Blogger just pull a fast one on me again?

Anyhoo, I think I said something along the lines of: Congrats! Can you get any MORE famous? :)

Congratulations, Dr. A! Not surprised though, your posts are always thought provoking.