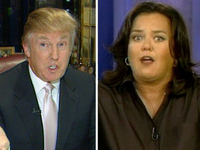 Many people believe that we should leave The Donald and The Rosie and their war of words back in 2006. I would tend to agree with that.

But, on Sunday, Lake Superior State University released its annual List of Words and Phrases Banished from the Queen's English for Mis-Use, Over-Use and General Uselessness." Their current list includes gems like, "show me the money, "erectile dysfunction" and "holiday tree."

This AP article reviews some of the words on the 2007 list:

Critics piled on the media's practice of combined celebrity names such as "TomKat" or "Brangelina." One said, "It's so annoying, idiotic and so lame and pathetic that it's "lamethetic.'"

Take "ask your doctor," the mantra of pharmaceutical commercials. The university called it "the chewable vitamin morphine of marketing."

The university's word watchers had no use for "truthiness," the word popularized by Comedy Central satirist Stephen Colbert. It was selected as the word that best summed up 2006 in an online survey by dictionary publisher Merriam-Webster.

So, as you're walking around today and writing your blog posts, make sure that you stay away from these banished words. Need the complete list? Well, here is the complete list of 2007 List of Banished Words. Enjoy!
at 10:09 AM

I keep waiting for the newsclip where they each stick their tongues out at each other and say "Nyah--so there!", heh.

Great link. Gonna have fun there!

Does this mean *pod is now a four letter word? :)

Personally, I don't pay much attention to the "overused" words ... and probably even less to their being banished.

I had to laugh at a few of those though ... healthy vs healthful? *LOL*

Yay! Finally we can get rid of TomKat. I hate that "word".

Wait a sec, "E.D." is banned? What about the poor souls (suckers) that actually have it?

Ah, but The Donald begs to differ about leaving wordy wars in the past. The Apprentice opens next week, too. Maybe we'll see some Rosi--uh, rosy puns thrown in, eh? :)