Kick out the kids 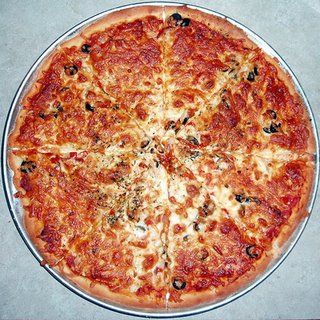 How are those new year's resolutions going? For me, after day one, I'm still hanging in there. However, are you already finding it difficult to keep that resolution of eating right? I've got an idea: Get rid of your kids!

This article from The Daily Mail describes that researchers at the University of Iowa have shown that living with children also means you are more likely to eat foods such as cheese, ice cream, beef, pizza and salty snacks.

This adds up to five extra grams of fat each day. And, taken over an entire week, this is equivalent to to a pepperoni pizza a week in saturated fat alone. The leader of the study said this:

"An important implication of the study is that healthy changes in eating need to focus on the entire household, not just individuals, especially when there is so much obesity among the young."

"Often children demand these less healthy foods but everyone's eating them and it's a pattern we've got to change by helping everyone think more about their dietary choices," she added.

I suppose that making healthy dietary changes for the entire family is better than showing your kids the door. You probably saw this study last week talking about Pre-school Obesity. But, the next time you're craving really fatty food and faced with the choice of getting rid of your pizza or your kid, which would you choose? HA!
at 8:59 AM

i guess i'd rather be obese then :)

heck doc i knew that a hundred years ago! they need to ask the mom's if they want any kid information..... we always cleaned their plates! (smile) bee

It wasn't like I needed one more reason to not want kids, but I'll take it!

I don't have kids and yet I find that my hubby and I eat all of that junk quite often. I can't imagine how horrible our eating habits would be if we had kids!

It's not all our fault!

Gawd, I want some pizza.

Funny enough I find myself eating more healthy when I am around children than when I am not as I somehow feel obliged to set the example, I just hope it will still be the case when I have my own.

Happy New Year Dr. A.! I have a great recipe for a guilt free pizza. Start with a 96% fat free, honey wheat tortilla. Put your favorite sauce on that, and whatever toppings you prefer. Cook until cheese melts and has that golden color to it; Cool, cut and serve. It will give you a crisp, thin pizza that even the kids will love! Try it, and let me know how you like it. It really is delicious.

Pizza or the kids? Hmmmmmm....

lmao... I never thought of THAT option! I actually never linked the 2 before (oddly! lol)

If only it was that easy! hehehe