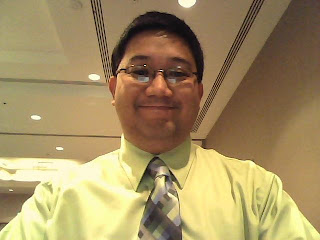 I've never been to this conference before, so I really didn't have any expectations coming in here. The only thing I knew that the target audience for this meeting are those in the pharma industry. If you didn't already know, I was asked to be on a panel discussion later this week. But, I wanted to check out the other parts of this conference to see what it was all about.

Even though this was only day one, I have definitely learned a lot. The morning session did reveal some interesting stats which I didn't know about before:
*Almost 75% of physicians own a smart phone
*84% of health care professionals access their smartphones in between pt consultations
*By 2013, mobile internet users will exceed desktop internet users
*1 in 3000 commercial messages, including detailing, results in a change in behavior
*1 in 3 interactions with a respected colleauges results in a change in behavior

Of course, what really interested me was the discussions that took place in regards to social media and pharma. What I'm learning is that like other industries, for those at the highest executive levels, social media is still a mystery. For example, there was along discussion on the question, "Is there ROI (return on investment) in Social Media?" (You can get a flavor of the tweets that were made from this twazzup link via Phil Baumann. Follow the tweets with the hashtag #digpharm)

One segment of the discussion which interested me was reviewing pharma websites which the audience felt were social media successes. The discussion was how these sites "created" patient communities. I disagree with this evaluation. I could be wrong, but I think these sites tapped into an already established disease specific patient communities. The question for industry is after getting these people signed up for their site, what is the next step? The discussion continues...
at 4:01 AM